There was a time some 40 years ago when all helmets were similar in their ability to protect the wearer. In retrospective, we have to admit that our product was only average at that time. Mitch Arai, however, became dissatisfied with being just average and wanted Arai to be something more. In 1976, he not only made the decision to “make Arai better”, but set his goal to “be the number one helmet in the world”.

“Number One” can have several interpretations, however; was it most helmets sold, most money made, most racing championships won? The decision was made, and there was a goal set, but there was no plan on how to achieve that goal or even a clear goal. Around that time he saw that the premier helmet in the world had been sold, the original creators gone, and the new offerings from the new company did not seem to improve or advance, yet they were still acknowledged as the best.

So Mitch Arai set his sights on making better helmets. Not helmets to be sold in high quantities, or helmets just to make the most profit, but helmets that offered more protection as he, like his father, was a rider and wanted to protect himself.

Having experience already in building helmets, he knew that shell strength was important in order to resist penetration of sharp objects and to maintain shape in an impact. He knew a strong, round shell would be better able to glance of an object, diverting energy and minimizing how much direct energy the helmet must deal with. This fact is something he recognized from the very beginning and is still true to this day.

Mitch himself experimented for months, into the late hours every night, trying to devise a method to produce consistent shell thickness. More experienced men in the shell molding department dismissed his efforts as a waste of time, but he persisted. After many months, some of these men tired of seeing him struggle and came to appreciate what he was trying to achieve and offered to help him. This was the beginning of “being part of something more”. These men joined an effort with a desire to contribute something more out of a passion for their work and a pride in what they produce.

After some progress, it was determined that it was impossible to achieve absolute consistency in shell thickness, so Mitch implemented the double quality control check of every single helmet shell in order to better identify inconsistencies so it they can be corrected. To this day, every single Arai shell is inspected by two individual and separate quality control check points.

Once the shell was brought to a level that satisfied the “shell experts”, attention was directed toward the interior liner. Managing impact energy, slowing the high speed of an impact within the short distance of a helmets liner, is an extremely difficult task. A strong shell displaced that energy over a wide area and it was the liners job to manage it. Many materials were considered, but EPS proved to have the best performance across a wide range of temperatures, and to this day is still the best material available to deal with absorbing more impact energy in the smallest space possible, while at the same time adding minimal weight. Arai then furthered helmet performance by pioneering the concept of multi-density liners to better deal with different impact energies in different areas around the helmet, allowing the maximum amount of energy management with the minimum liner thickness.

It was during the experience of developing the new shell moulding process and multi-density liners that Mitch recognized the value of the accumulation of small details, which when combined advanced the performance much more than expected. To this day no small detail is dismissed or taken for granted, as each one plays an important role as a part of the bigger whole.

With an improved shell and new multi-density liner, Arai set out to prove their efforts by having racers put their helmets to the test. It soon became apparent that while there was no real plan in place, they certainly were heading in the right direction. Rider protection increased and Arai quickly gained a reputation as being a better helmet. Once the Japanese market was dominated with Arai, sights were set on America, and as they did in Japan they approached riders with the concept of better protection. After convincing a few, just as it happened in Japan, it didn´t take long for word to spread about a better helmet from Arai. Soon, Arai was on the world Moto-GP scene, being worn by racers from around the world and winning championships, and Mitch´s goal was reached – the Company that bears his family name is acknowledged as producing the #1 helmet in the world.

WE ARE BIKERS TOO

Everyone at Arai take great pride that the #1 stands for protection. It has been said of helmets in the industry that liabilities of manufacturers primarily cease by meeting requirements of applicable standards. However, there are limits to any helmet, while there is no limit to severities of impacts outside of the test lab.

We at ARAI are bikers too. So, we have always been after protection for the rider riding on the road, not in a test lab. We have challenged many ideas too. We even invested in making samples of revolutionary ideas, but none of which have been found to be trustworthy as of today.

One such difference is in a foundational basis for Arai shells, referenced as R75. R75 sets a criteria for a shell shape that is rounder and smoother, which is better suited to deal with the realities of an actual crash. Such rounder and smoother shell designs are better able to glance off obstacles, and slide more easily over uneven surfaces, minimizing impact energy that is sent directly into the helmet as well as reducing excessive rotational forces.

In the course of doing the above, however, we have noted that many components of our existing helmets may be enhanced to do better in real world. Each of such may not do much by itself, but improving even small details keeps us moving forward. So, we have kept putting efforts in such enhancements, one after another. In fact, the long history of ARAI has been making of such differences in protection through those efforts.

When protection of helmets in real world are talked about, it has come to be said quite often that there is a difference in ARAI. The accumulations of such numerous efforts must be where such words come from.

HIROTAKE ARAI: A RIDER HIMSELF

The focus on safety is typical for Arai through the many years of the brands existence. The founder of the company, Hirotake Arai, was a hat maker, but although a really enthusiast rider.

In the fifties there were no helmet manufacturers in Japan and as Japan was a closed market, it was very difficult to obtain a proper helmet. No legal standards, no manufacturers but after a few spills Hirotake Arai knew he wanted a good helmet for his own safety and later also for a couple of friends. It was the start of Arai as a helmet manufacturing business. The next thing was to develop his own testing standards and testing equipment, as no legal standards existed. As a hat maker he knew that people have all different heads, creating a need for a perfect fit of the helmet.

It’s important to notice that Hirotake Arai’s intention was not to start another commercial business, but to create helmets that were able to protect his fellow riders. It is this drive that is still within the Arai company to this very day.

Long before helmets were available in Japan, Hirotake Arai showed his skills on a motorcycle. 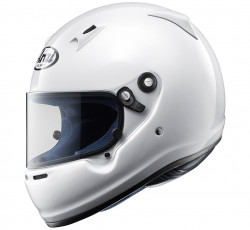 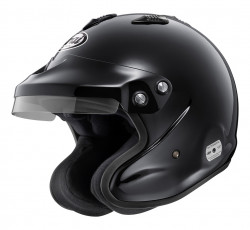 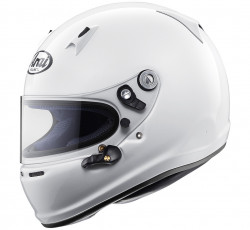 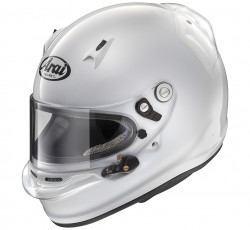 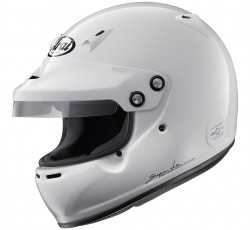 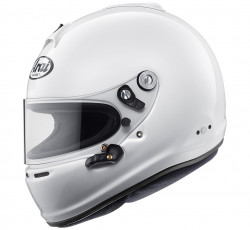 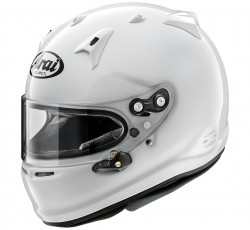 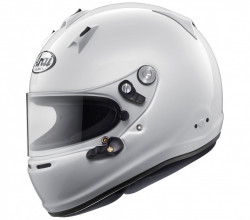 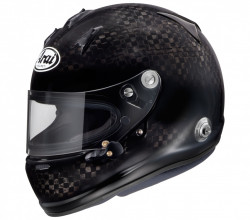 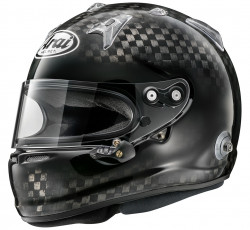